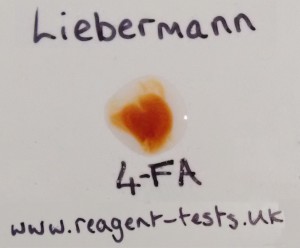 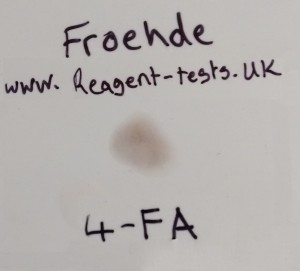 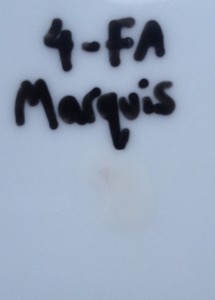 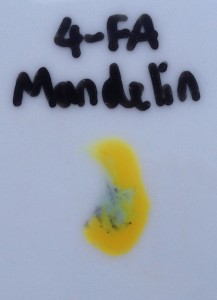 alpha-PVP is a potent stimulant of the reuptake inhibitor class. Its similar effects to cocaine, including a mild local anaesthetic effect have lead it to be sold as cocaine, but strangely, also as MDMA. It is class B in the UK and banned in China and many parts of europe.

a-PVP gives no reaction with the marquis reagent, the liebermann reagent and the gallic acid reagent. Alpha-PVP gives a light pink colour with the froehde reagent after 20 seconds.

As always, if you are expecting MDMA and do not get the reaction expected, we recommend disposing of the compound. MDMA does NOT have a numbing effect so you should also discard pills and powders sold as MDMA with a numbing effect.

You can buy the froehde reagent for this test in our store.

The use of 2C-E as a psychedelic drug is well established and cases of mistaken identity appear rare but we noticed that there were no reagent test results for it using the froehde reagent online.

2C-E reacts with the froehde reagent to give a bright lime green colour within a few seconds. You can see the image below Also shown is the reaction of 2C-E with the marquis reagent. The colour is an orange-brown after twenty seconds.

Some more new reagent results with photos – 3-MeO-PCP is an interesting one here, the reaction is very slow compared to many other chemicals. It causes the marquis reagent to go a pleasant royal blue colour over the course of 1-2 minutes. The froehde reagent is less pronounced, but after it finishes fizzing it takes about the same time to turn to a pale orange colour. This sample is unverified and does not match other tester’s reactions so may be contaminated with an impurity.

Images below are taken at 15 seconds and 2 minutes. U-47700 is a novel synthetic opioid, one of a very small number of non-fentanyl-derived opioids on the market. Testing with the marquis and froehde reagents both gave fizzing with no colour change on a sample of U-47700. You can see the rather uninteresting images below: Note that the marquis reagent is off-clear but this does not represent a change from its starting colour.

We’re excited to finally be adding the Mandelin reagent to our stock. This is a crucial reagent for the detection of dangerous PMA and PMMA substituting MDA and MDMA. The two are not commonly mixed but PM(M)A is not detected by the Marquis reagent so this can lead to a false sense of security with Marquis but with the Mandelin reagent a reddish brown reaction is given.

The Mandelin reagent can also be used to identify ketamine and cocaine, which give deep orange/red and deep orange/yellow reactions respectively.