Some suppliers of reagent tests provide reaction charts which show methylone as a possiblity. Often, it is the only yellow option on the chart for the marquis reagent. If the only reagent used is the marquis reagent then it’s reasonable that a person would assume they have methylone. This is a dangerous assumption because in 2021, it’s not methylone. You can get the kit to prove this here, but read below to understand exactly why it’s so unlikely.

It is very unlikely because methylone:

If it was methylone (very unlikely) then methylone is very similar risk to MDMA but with less lovey effects and much shorter duration. The whole reason we take issue with this misleading reaction chart is because people might take this substance thinking it’s methylone and that they are happy with the risks being similar to that of MDMA itself.

So what are these substances if methylone is so unlikely, and how can we be sure?

N-ethylpentylone and eutylone are more common now and much more likely to be the culprits here because:

We wrote an article on detecting N-ethylpentylone in 2018 because it was so common and causing so many problems. https://www.reagent-tests.uk/blog/how-to-detect-pentylone-and-n-ethylpentylone-sold-as-mdma/

The problem with these nasty compounds is that they lull people into a false sense of security because they feels kind of adequate enough at first, enough to make someone think they just have “rubbish MDMA”. The good effects last about 2 hours, so people take more.

But each redose adds about 6 hours onto the time a person can’t sleep for, so party for 10 hours and then can’t sleep for 30 hours after that. The mixture of residual dopamine release and insomnia then has the ability to cause intense paranoia and anxiety and in vulnerable people (about 1 in 20 cases, particularly at festivals where people dose 2 nights in a row) that develops into temporary psychosis which doesn’t subside until the person can sleep. This often requires medical intervention.

So what’s the solution to this? Always test with more than one reagent. It massively increases confidence in the accuracy of the result and completely avoids this confusing situation.

DXM is a dissociative drug (in the same family as ketamine) which also has activity in the serotonin system. It is most popular in the US as it is readily found in some cough medicines but is also found as a white powder in other places.

Cough syrup cannot be tested with reagents because it contains a number of other chemicals such as water, sugars and colourings. Fortunately it is a legal product and also tends to have an ingredients list to warn about dangerous additives like chlorpheniramine and paracetamol (AKA acetaminophen in the US).

DXM reacts with reagent tests as follows. Slow reactions can be a bit confusing so we would recommend a minimum of two reagents but ideally three or more.
As an aside, reagent tests do not give “purity” readings but they do detect substitution and often adulteration, too.

The plus side of a slow reaction is that if a fast reaction to a different colour happens while you are waiting, you know that there is something else present.

The MDMA & Psychedelics Multipack is the best option for testing DMT. It contains the ehrlich reagent which is a “binary test” for the presence of compounds in the DMT family (technical term: indole-containing substances). If it stays clear then there is no DMT present in the sample.

If the ehrlich reagent goes purple then you can corroborate with other tests as follows:

If the froehde reagent changes colour then you know that other compounds are present.

One of the challenges with drugs from plant origins is that plants contain many compounds and these are extracted by the same process. This makes it very hard to tell if any “other chemical” is from the plant or if it has been added by the person making or selling the compound. We recommend that the Best Practice is to discard any drug which has any reaction not compatible with the pure form of the expected substance.

Mexedrone is the only cathinone currently sold legally in the UK. It strays significantly from the traditional structure by having an ether group in the alpha position, which makes it legal and brings the dose to be the same as mephedrone. It is still a stimulant drug, and does seem to have collected some limited popularity among enthusiasts.

It takes the form of some quite attractive white/colourless crystals.

The reagent test kit results are as follows, with the marquis test first, showing fizzing but no colour change. 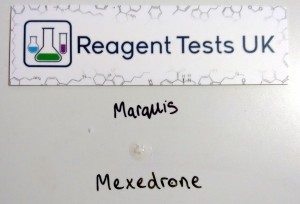 The froehde reagent test gives the same reaction with mexedrone – no colour change. 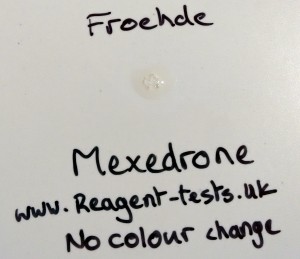 Yet again the liebermann reagent pulls through, giving a bright yellow/orange reaction. 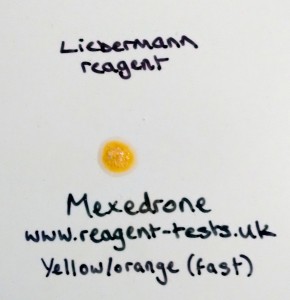 Dibutylone is a novel cathinone stimulant which appears to be sold as MDMA and mephedrone since butylone has been banned. Based on similar compounds it is likely that it will behave as an “extended release” version of butylone, and be inactive until it passes through the liver. This would make snorting mostly ineffective.

Dibutylone forms attractive crystals and is quite cheap. You can see a picture of the dibutylone tested here below: 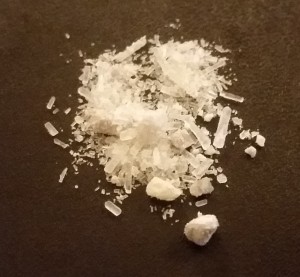 You can see the reagent test kit results below. These were kindly submitted to us by a third party who was sold it as mephedrone and verified the sample with WEDINOS (W005102) 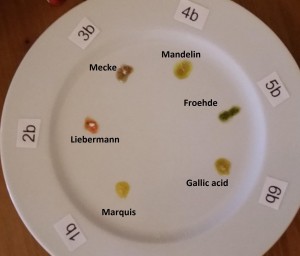 None of these compounds had results available so we thought we’d test them so that future researchers would be able to screen for them.
Ibuprofen is of particular note because its easy availability makes it good for testing the reagents themselves to ensure they are still working well.

You can see the results below: 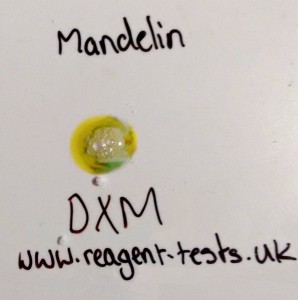 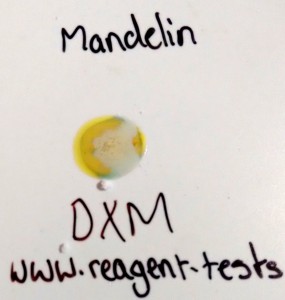 DXM is an interesting one here, it very quickly reacts (as with most reagents) giving a green colour which progressed to blue within 15 seconds. The second photo is at 60s and shows the colour progression to clear in the middle with a blue tint at the edges. 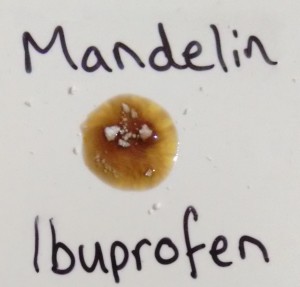 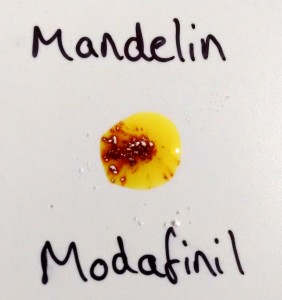 Modafinil gives the same deep brownish red that is seen with some of the other reagents when reacting with the mandelin reagent. 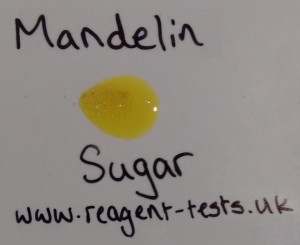 Sugar doesn’t react at all with the mandelin reagent

We previously tested U-47700 as it was becoming popular and since we’ve added new reagents to our offerings while its popularity has continued to rise we decided it was worth testing again.

You can see the original test results here but the summary is that there was no colour change.

The liebermann and mandelin results were only fractionally more exciting. 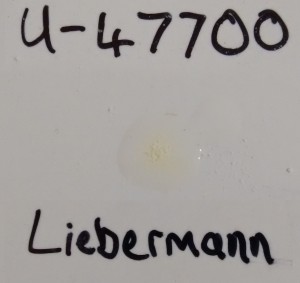 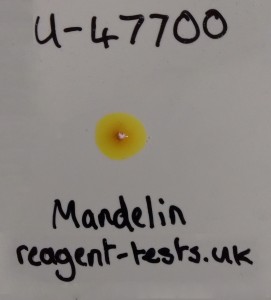 Tianeptine is prescribed as an antidepressant (Stablon) in Russia but has found significant popularity among nootropic users worldwide for its anxiolytic and antidepressant effects, with many finding it useful for depression which has resisted other treatments.

We have teamed up with NewMind to publish the results of their testing of tianeptine so that buyers can more easily avoid the many shady nootropic vendors that have appeared online. Liftmode are unusual in that they test all of their products using reagents and traditional laboratory techniques, and are willing to share their results with the community.

This sample has been confirmed by HPLC to contain 99% sodium tianeptine.

Tianeptine reacts with the mandelin reagent to give a dark black reaction. The other reagents do not produce notable colour changes.

Ephenidine is a dissociative drug with a very simple chemical structure. It is generally said to have similar effects to methoxetamine (MXE) but is legal in most places in the world. The effects last around 6 hours and the dosage is around 70-110 mg.

We couldn’t find any reagent test results for ephenidine so we took our own. Note that this sample has not had its identity verified yet.

The mandelin reagent goes to a dark green colour within about 10 seconds.
The marquis reagent goes to orange fairly quickly, and progresses to a brownish orange over the course of a 60 second test.
The froehde reagent gives a light yellow colour when reacted with ephenidine.
Finally, the libermann reagent goes very quickly to a deep red and then progresses quite quickly into a simlar red with a more brown body.

You can see the reagent test kit reaction results below. Click to enlarge 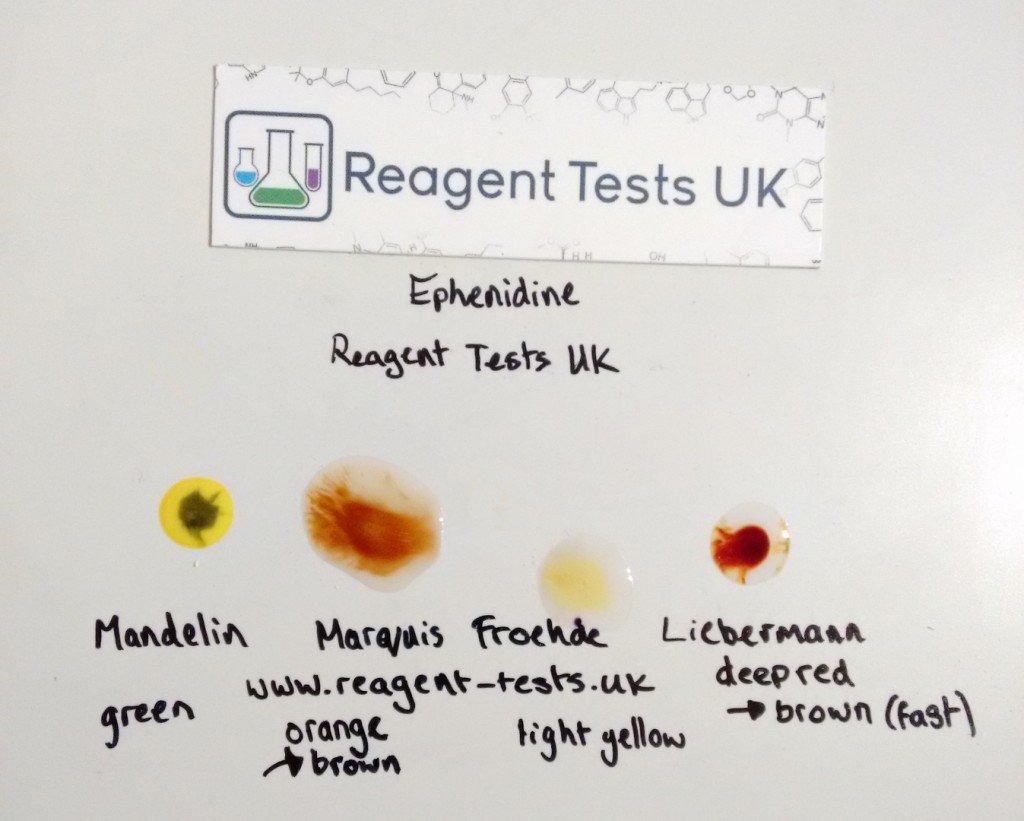 2C-T-7 is a psychedelic phenethylamine with a long duration. It has not got the same favourable safety profile as other drugs in the class and deaths have resulted from high doses.

Though the mechanism for these deaths was once speculated to be through MAOI activity, the low MAOI activity of “Aleph” and other alpha-methylated thiophenethylamines suggests that this is not the case, as alpha-demethylation and addition of methoxy groups to the 2 and 5 positions on the ring both result in reduced MAOI activity.

Regardless of this, 2C-T-7 is still dangerous even if we don’t quite know why, so being able to identify it is useful!

You can see colour changes from the liebermann reagent testing kit below.

The test initially (and very rapidly) turns a beautiful royal purple. After about 15 seconds it appears that moisture from the air causes an orange colour to develop at the fringes. Over the course of about 5 minutes the sample turns completely orange. 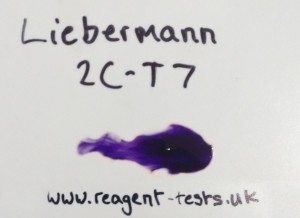 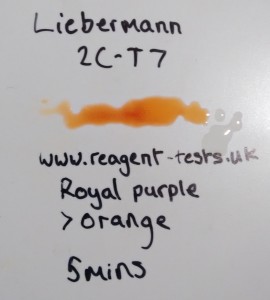 This sample’s identity was confirmed as 2C-T-7 by WEDINOS.